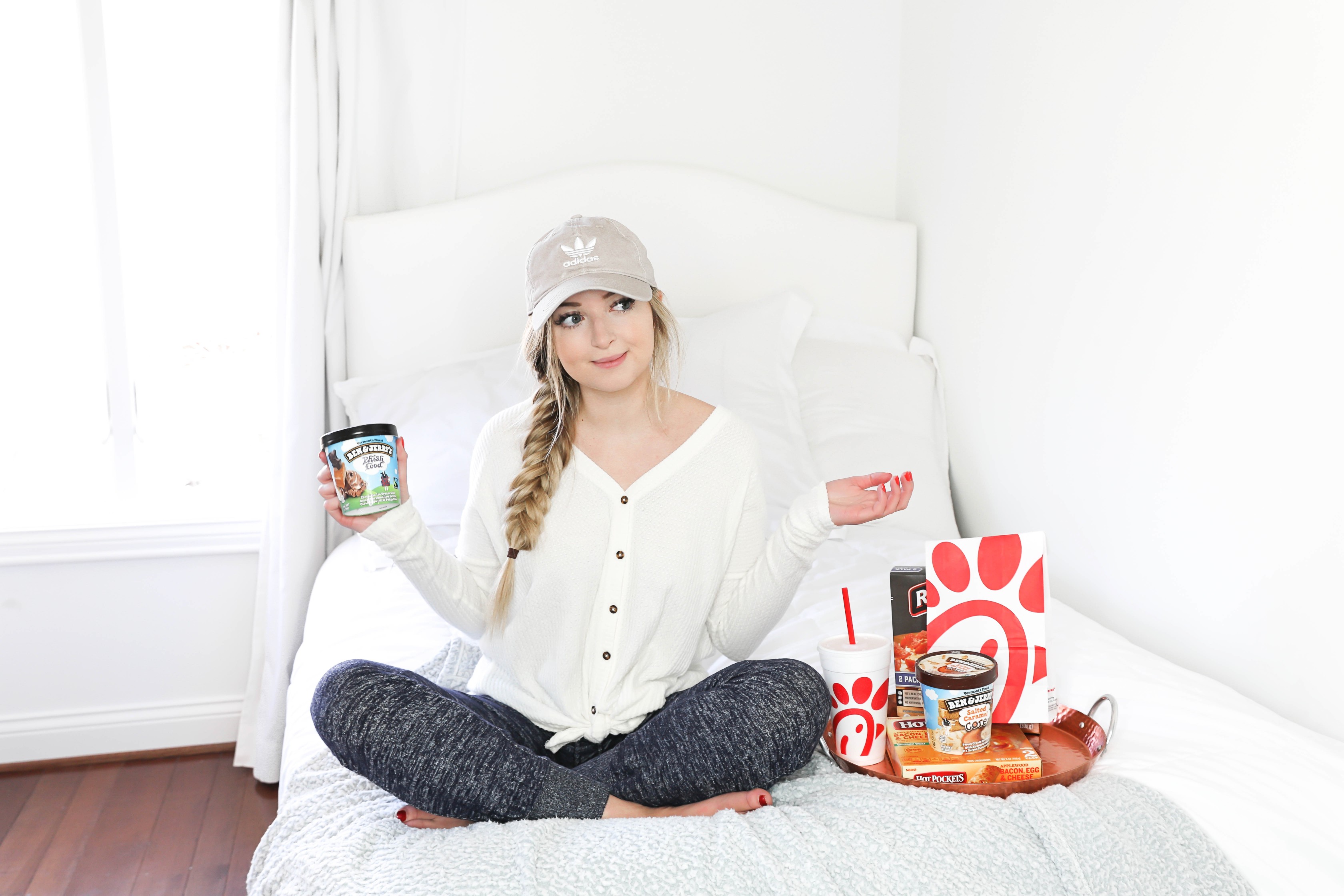 Getting my Skyla IUD Q&A + My follower’s Experiences & Advice

The joys of being a woman haha! Don’t get me wrong, I love being a girl, getting to do my makeup, dress up, do my hair, and all the basic girly things – but do you ever just think about how easy it would be to be a dude? No Gyno visits, periods, birth control, UTIs, yeast infections or other worries? Must be the life haha!

Yesterday I got an IUD and oh boy was it an experience. A lot of you asked for a post about it, so here it is! Disclaimer, I am not a doctor (obviously), so if you are seriously considering an IUD please talk to your doctor about it! This is also just my experience (and my followers) so it will be different for everyone. There are risks to the IUD so make sure to do your research. 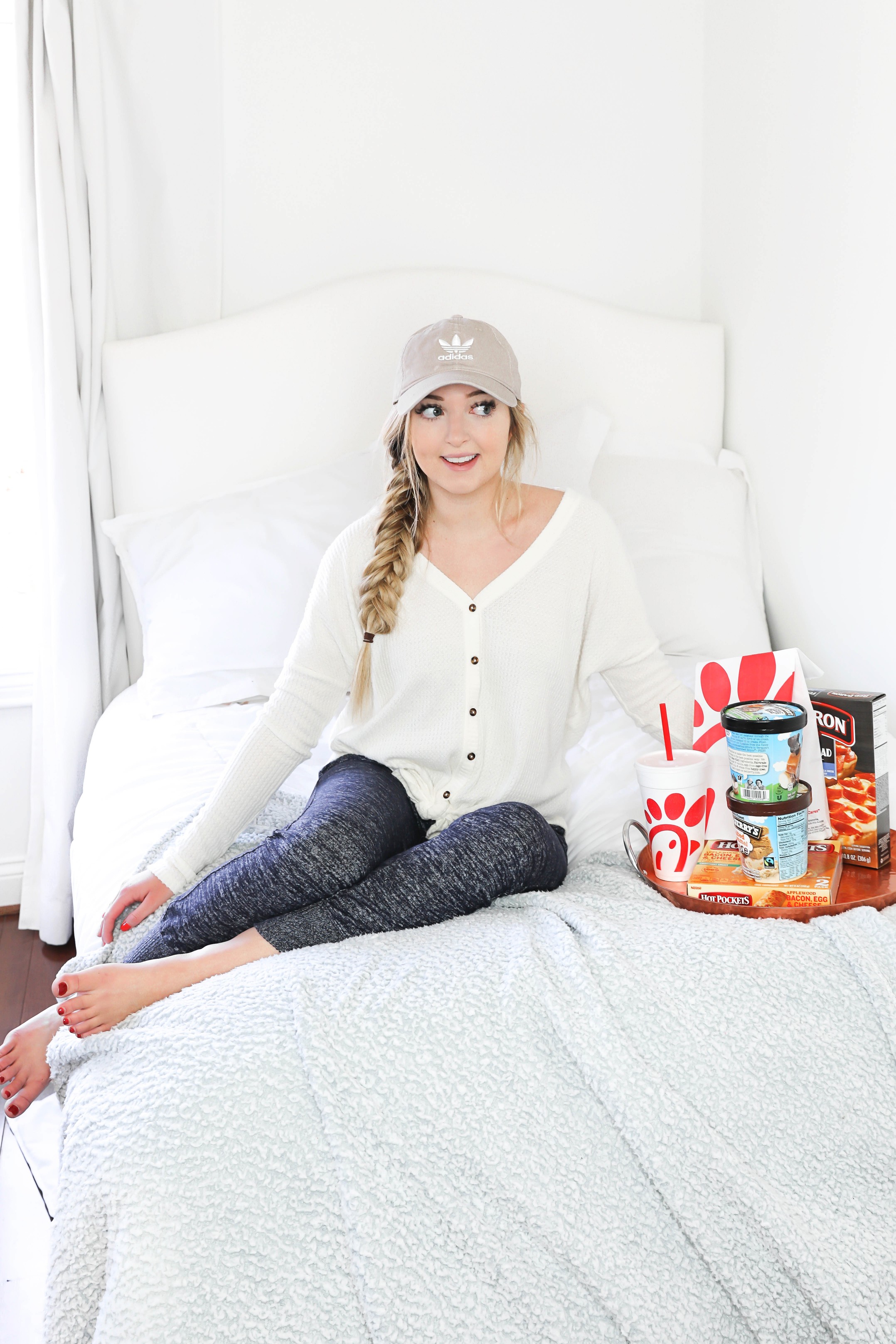 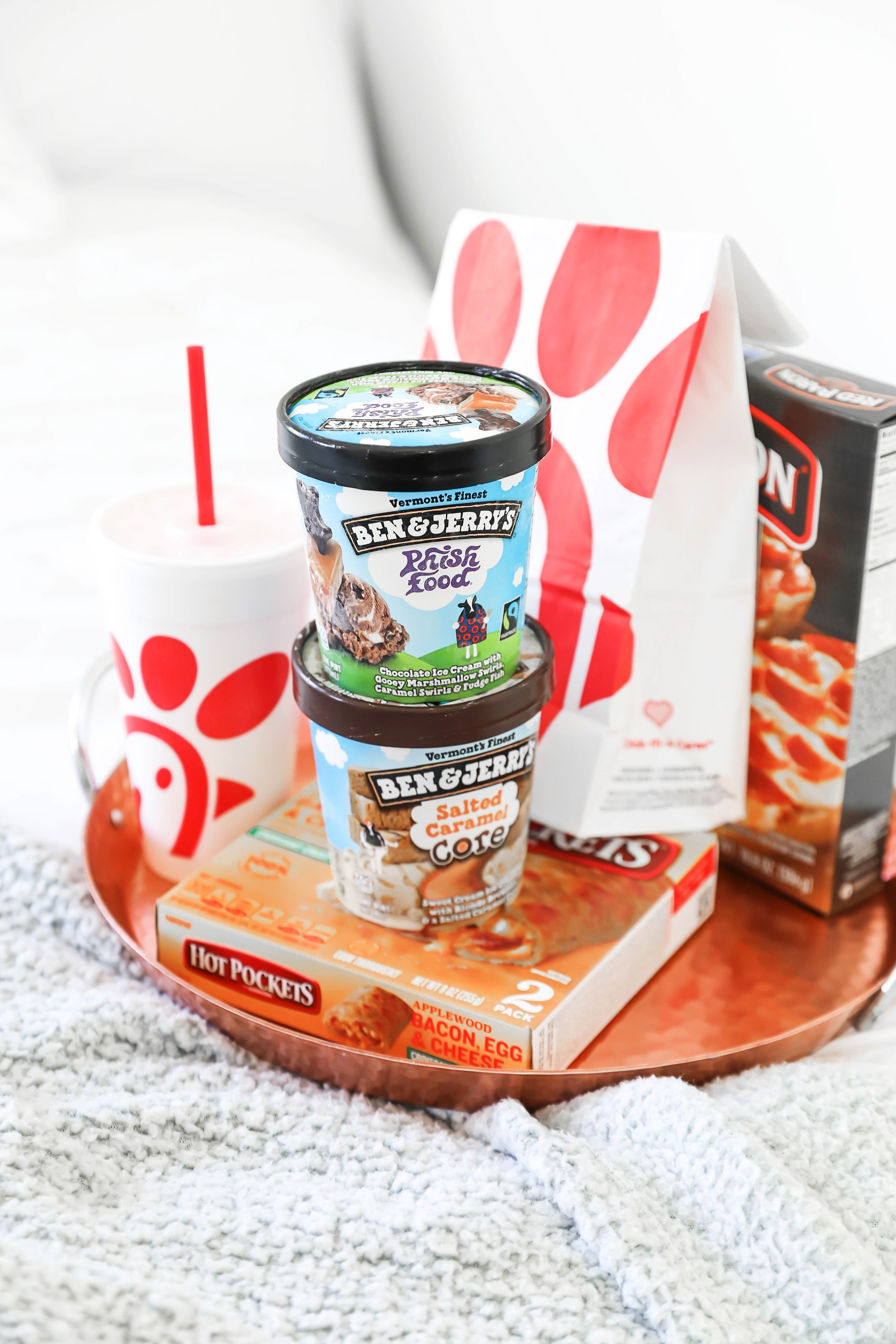 What is an IUD

An IUD is an “Intrauterine Device.” It is a form of birth control that is implanted in your uterus. The IUD is 99% effective, making it one of the most effective birth controls on the market. There are a lot of benefits to getting an IUD, including birth control, regulated periods, and more. They last 3-10 years (depending on the brand) and can be removed at anytime. They come in a few different brands that are different sizes with different amounts of hormones.

Why did you get an IUD?

I have been on the birth control pill since I was sixteen. I got it because I had really bad hormonal acne, and I stayed on it as I got older and became sexually active. Lately I have been horrible about remembering to take it and it’s been messing with my hormones since I am not taking it frequently (it also isn’t protective that way). My best friend and older sister both got the IUD in the last year and LOVE it. My bff has never had regular periods and the IUD has especially changed her life because she doesn’t constantly bleed anymore!

Why that form of birth control and not…?

I got a lot of messages and questions about “have you looked into the shot?” or “I have the arm implant” etc… Honestly this is just what I decided to get after my research! I liked that I could easily get it removed if I didn’t like it. It also made me feel better that it’s so common and lot of people in my life had them!

Which kind of IUD did you get?

I decided on the Skyla. I didn’t really want one with hormones, so I was thinking about the copper IUD, however, my doctor told me the Skyla is the smallest and has the least amount of hormones compared to the other hormonal IUDs. The copper is actually the largest which she said would hurt more! She also explained that the hormones in the Skyla are more like “localized” hormones so they shouldn’t effect me.

Holy f*** yes. Which is also what I yelled as the doctor put it in. I am not someone that curses usually, but it hurt sooo bad. The doctor had warned me that “on a pain scale of 1 to 10, it’s a 10.” To be honest though, I thought she was exaggerating. I always thought I had a high pain tolerance, but this pain was like no other. It felt like someone was stabbing a knife through my uterus. The good thing is, the worst of the pain only lasts 30 seconds since it’s a quick procedure. Afterwards the pain goes down a little for 5-10 minutes and the rest of the day I was just crampy!

Why does it hurt?

The reason for the pain is because the IUD goes in your uterus, hence the name “intrauterine device.” Up until this point in my life nothing had ever been in my uterus, so my doctor described it as “your uterus having an unwanted roommate for awhile.” Haha! So when the IUD goes in the uterus it hurts for about 30 seconds as the doctor measures and puts in the device. Then afterwards the cramping is your uterus trying to get used to the IUD!

Super quick, which is what made me less scared. She put a device in so she could see, she made me hold my legs open so I didn’t squeeze them shut through the pain, then she measured my uterus and quickly put it in. Thank goodness for the nurse that help my hand haha! Then I just sat in the room for ten minutes before leaving.

Where did you get it done?

My Gynecologist did mine! Many primary care doctors also do IUDs as well as Planned Parenthood!

Did someone have to drive you?

It isn’t required, but I recommend it. My sister drove herself and her biggest advice was not to do that because you don’t feel up to driving after. My amazing momma took me!

What did you do to prepare for your IUD?

I made sure I was able to take at least two days off of my work, I bought a ton of yummy junk food that I could look forward to, grabbed a heating pad, then took 2 Advil two hours before my appointment then continued to take it the rest of the day!

The cramps were bad at first, but after I went home and laid down with the heating pad I was fine! I actually napped most of the day because I didn’t sleep well the night before (I was anxious). I made sure to buy a ton of junk food that I never eat so I had something to look forward to haha! Day two has been fine so far! A few mild cramps here or there, but other than that I feel normal.

Is it worth it?

So far, yes, but it’s only been a day. I am going to do a one-month follow up blogpost and maybe one a year from now too! The pain sucks, but so does having to remember to take a pill, refill your prescription, etc. I feel confident about this kind of birth control which is a nice change!

If you want more info on the IUD Planned Parenthood has some great information on it! Here is a link! 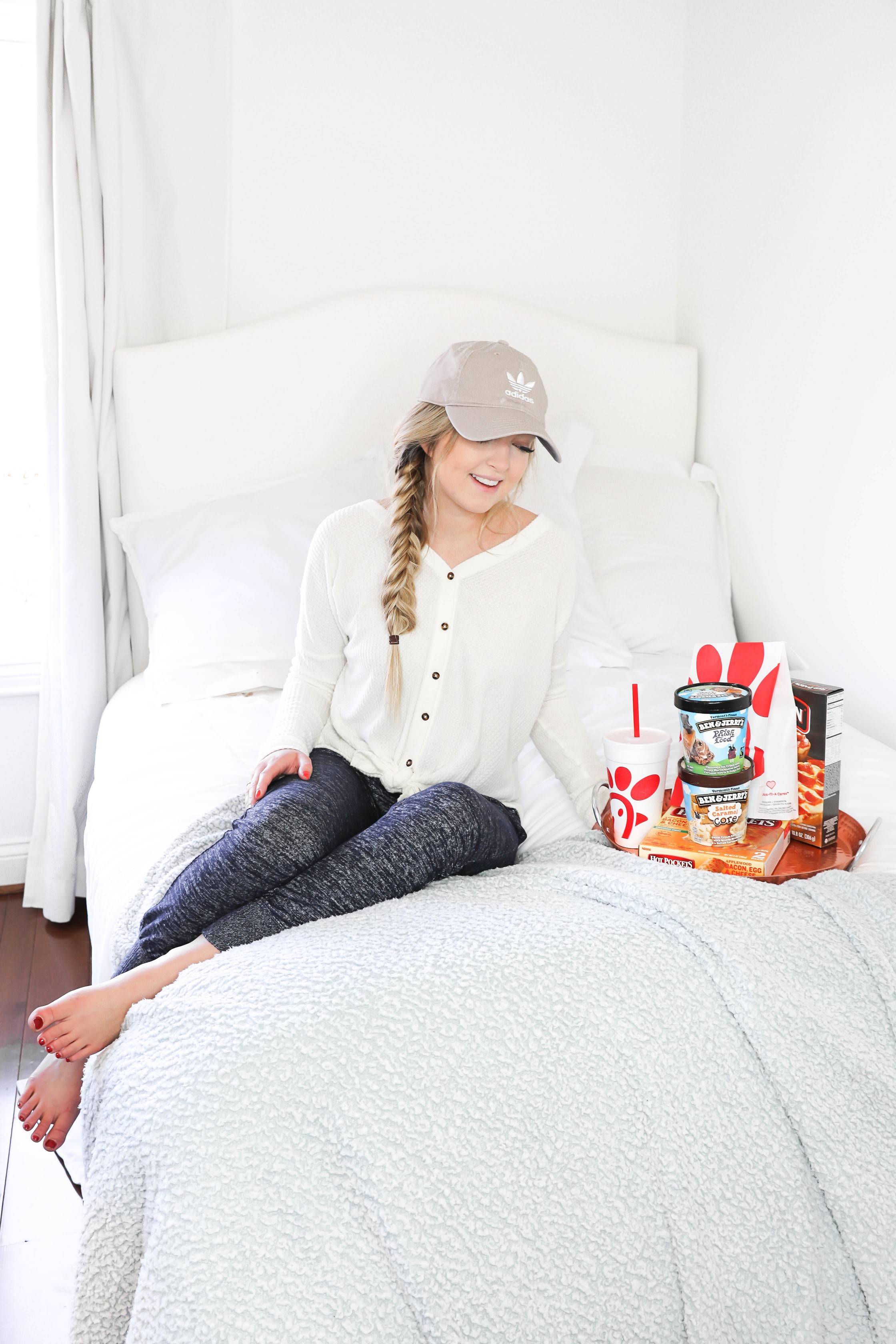 I am really lucky to have this platform because I have 15,000 of you to go to for advice! I had so many messages about IUDs over the last week so these aren’t all of them, but thank you to EVERYONE who sent me a message!

Zoom in to see my followers advice, questions, and experiences! 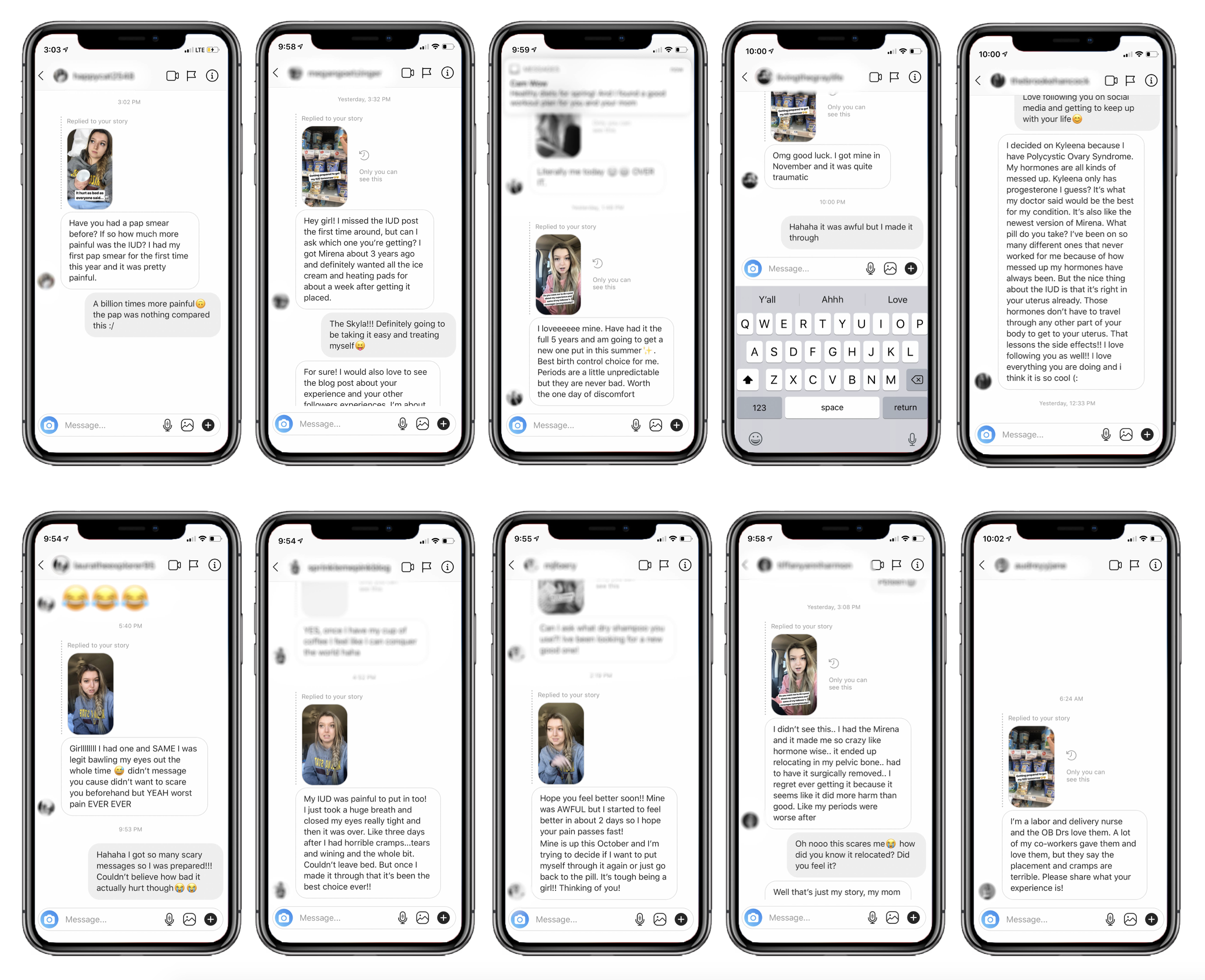